Pioneer ministry is for the long haul

A couple of extracts from the Rowan Williams interview with Tim Nash mentioned in the previous post:

RW: I think it’s unavoidable that at the moment for a lot of people there’s the sense that this is the real stuff and the rest is just flannel. There are two things which I think the church has done officially to counter that in recent years. One is making it possible for bishops to create some space and so by giving what we call a Bishop’s Mission Order - to say, look there’s going to be some space there for some new things to happen, we’re not going to load this down with all the expectations of, you know, paying your assessments to the wider church and going through the hoops of administration. This is experimental territory. And a Bishop can say that’s going to happen.

We’ve also got now pioneer ministries in the Church of England, people who have been identified as having a calling to entrepreneurial, groundbreaking ministries and we recognise that we ordain them into those ministries, not just into the parish system. It’ll take a while but those are some of things in place to help make it a bit more mainstream.

TN: I was going to ask you about that, because I come from a Methodist tradition and they’ve started to recognise that these new forms of church take a long time to embed and to become financially sustainable and they’ve launched a number of 10 year funded projects. Is that something that the Church of England will be doing?

RW: That’s absolutely right and that’s part of the background that we bring to it as well. I think the partnership with the Methodist Church has been important for both churches, in fact. We’ve all learned from this process. But, yes, the assumption that you’ve got a new project and somehow it ought to be paying its way within three years, …well, …reality check! It’s not going to happen. And it may never happen and sometimes a project will blossom and then wither for all sorts of reasons which aren’t discreditable -it’s done its work, it’s sown some seeds. So, the long haul – deep breaths, I think – that’s very important.
Posted by Ian Bell at 12:52 1 comment:

I happened across a very interesting interview with Archbishop Rowan Williams.  He's talking to Tim Nash of the Nottingham-based missional community, Nomad.  Some interesting comments about the significance of fresh expressions and the 'little team' of people who are guiding it.  I was particularly heartened by his acknowledgement of the Methodist Scheme and our intention to support our projects for a period up to 10 years.  It's great to have his backing for the concept that pioneer ministry needs to be supported for the long-haul not the quick fix.  Tim's a Methodist and sounds like he's doing a great job in the Nottingham area.  There's some more podcasts on the Nomad website with some VERY interesting people!
Posted by Ian Bell at 12:00 No comments:

Noticed that Jonny Baker is leading a three-day event on pioneering mission at the Windermere Centre in the Lake District from May 3-6. Anyone thinking about the possibility of getting involved in this kind of work (maybe through VentureFX) might consider booking in to explore what it is all about.
Posted by Ian Bell at 21:32 No comments:

The first VentureFX project to get underway is in Sheffield.  Working in the Handsworth and Ecclesall Road areas, Ric Stott has begun to work with a small team to pioneer work with 20 - 30 years olds using arts-based activities. 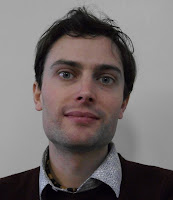 Ric has art training and sees this as an exciting and creative way of reaching people who don't normally come to church.  Already there has been significant interest in what Ric is doing, and new opportunities are opening up all the time. Ultimately it is hoped that some kind of fresh expression of church will develop but for the moment Ric is trying to make links and establish relationships.

Please pray for Ric and this project.
Posted by Ian Bell at 12:42 2 comments:

You may have heard that CMS (Church Mission Society) has become an acknowledged community of the Church of England and Jonny Baker has recently blogged about the implications of this.  As a mission community CMS is now able to do some things that it wasn't able to before which will give it greater freedom to encourage pioneer mission and to develop a new training programme for pioneers.  As part of the establishing of the community seven statements have been formulated which community members adhere to as a rule of life and I thought it was worth mentioning them for us all to consider:

1. I want my life to be about mission
2. I believe God is still working in this world
3. Mission isn't someone else's job, it's mine
4. I want to live for Jesus every day
5. I realise I need fuel for my journey
6. I want to help my local Christian community keep mission a priority
7. I want to regularly renew my mind and spirit

They strike me as being a pretty good statement of what we should be striving for!
Posted by Ian Bell at 20:08 No comments: