The latest VentureFX project started in December and is located in Exeter. Jon Curtis is the VentureFX pioneer who has been appointed to lead the project. Jon is from Exeter and is already well known among many of the young adults in the city.  He belongs to a Methodist Church in Exeter and has been involved with numerous fresh ways of being church as well as having an interest in football, supporting homeless people, youth work, social action and global justice, and punk rock music.  He plays with punk band 'The Cut Ups' and has recently toured Europe with the band. He has a close association with The Cavern, a live music venue and bar in the city centre, and has spent a long time promoting live music in Exeter.  Jon will be drawing on all his experience and networks of young adults as he seeks over the coming months to create a fresh expression of church to which they can relate. 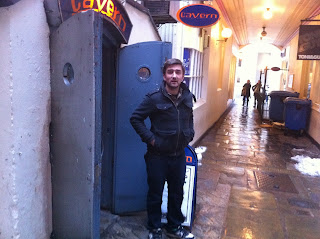 You can see Jon and The Cut Ups in action here
Posted by Ian Bell at 15:26 No comments: